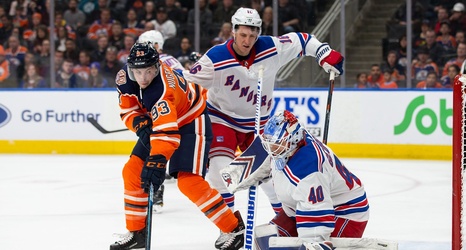 EDMONTON, AB - MARCH 11: Ryan Nugent-Hopkins #93 of the Edmonton Oilers takes a shot on goaltender Alexandar Georgiev #40 of the New York Rangers during the second period at Rogers Place on March 11, 2019 in Edmonton, Alberta, Canada. (Photo by Codie McLachlan/Getty Images)

There have been three transactions in the last week that could be significant for the New York Rangers as Chris Drury works his way through his to do list. In the first deal, Ryan Nugent-Hopkins signed an eight year extension with the Edmonton Oilers. In the second deal, the Nashville Predators traded Victor Arvidsson to the Los Angeles Kings.