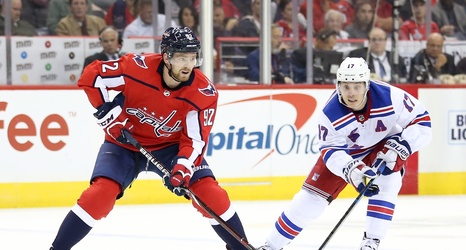 WASHINGTON, DC - OCTOBER 17: Evgeny Kuznetsov #92 of the Washington Capitals and Jesper Fast #17 of the New York Rangers go after the puck during the second period at Capital One Arena on October 17, 2018 in Washington, DC. (Photo by Will Newton/Getty Images)

The draft has come and gone, and the Rangers are still in the market for a number two center. We all know about Jack Eichel being available but enough about him, there are other centers available. One of those centers is Washington’s Evgeny Kuznetsov. The Capitals are nearly out of cap space and according the Fourth Period, are giving Alex Ovechkin a four-year $40 million deal.