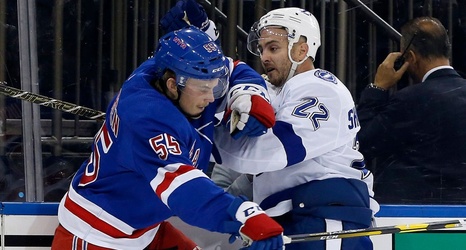 Ryan Lindgren of the Rangers checks Kevin Shattenkirk of the Lightning at Madison Square Garden on Oct. 29. Credit: Jim McIsaac

David Quinn knew he wanted to get veteran defenseman Marc Staal back into the lineup after sitting the 32-year-old alternate captain for three straight games, but the question the second-year coach was faced with was which defenseman would he take out to create an opening for Staal?

He settled on taking out Ryan Lindgren, the 21-year-old rookie who had been the one who bumped Staal out of the lineup in the first place.