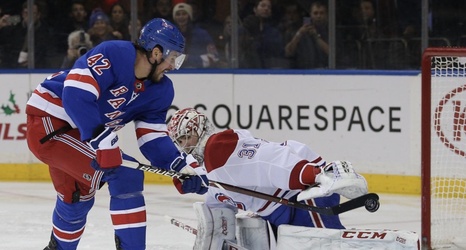 In what was a tight contest, the Rangers just fell short after giving up a late third period goal to Nate Thompson to seal the 2-1 win for the Canadiens at Madison Square Garden. Here is our recap.

Before the game, it was announced that Libor Hajek would be out 3-4 weeks with a knee sprain that he suffered in the game versus Columbus. The loss of Hajek opened a spot for Marc Staal, who made his return after being out almost a month due to an infection in his ankle.

Not enough shots: Although the Rangers put up 30 shots on net, for the majority of the night, they were either outshot my Montreal or were passing up many shooting chances that could have resulted in goals.