On April 4 in NYR history: A Vezina Trophy for Eddie & Gilles 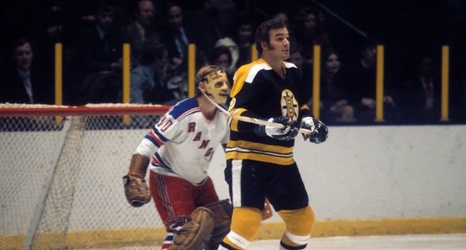 NEW YORK, NY - 1971: Ken Hodge #8 of the Boston Bruins tries to screen goalie Gilles Villemure #30 of the New York Rangers during their game circa 1971 at the Madison Square Garden in New York, New York. (Photo by Melchior DiGiacomo/Getty Images)

On this date in 1971, the New York Rangers shut out the Detroit Red Wings 6-0 in the last game of the season. Ed Giacomin was in net and with the shutout, he won the Vezina Trophy for the Rangers as he and Gilles Villemure shared the award given to the team that allowed the fewest goals in the regular season.