On April 3 in NYR history: A trade with consequences 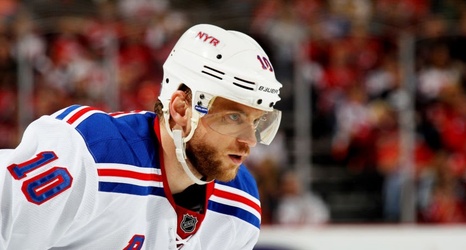 NEWARK, NJ - MAY 21: Marian Gaborik #10 of the New York Rangers looks on in Game Four of the Eastern Conference Final during the 2012 NHL Stanley Cup Playoffs at the Prudential Center on May 21, 2012 in Newark, New Jersey. (Photo by Bruce Bennett/Getty Images)

On this date in 2013, the New York Rangers made a trade that would have consequences for many years to come. Due to the lockout, there was a late trade deadline and two hours before the deadline on April 3 the Rangers traded Marian Gaborik to the Columbus Blue Jackets for Derick Brassard, Derek Dorsett, John Moore and a sixth round draft pick.