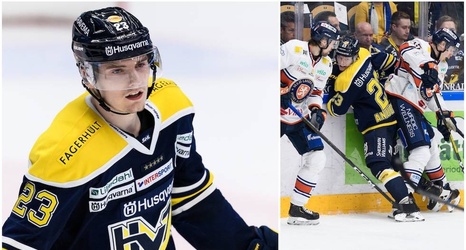 A few weeks ago we reported that Lias Andersson had signed with his former team HV71. The 21-year old center, who wanted to move back to Sweden for personal reasons, feels comfortable with the team and teammates he was with 3 seasons ago. He was intially expected to make his season debut today, but he surprised everyone by being good to go before the international break in a a resounding victory over Växjö.

He was received with applause and cheers from the homecrowd who fondly remembers the young center from their championship year in 2017, where Lias was an integral part in the play offs.