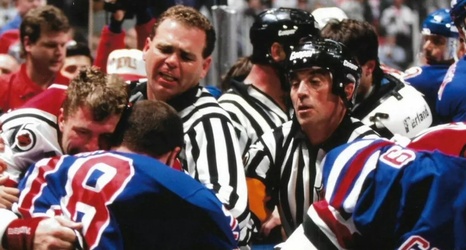 If you were around for the epic battles between the Rangers and Devils, then you know who both Tie Domi and Scott Stevens are. Domi, probably the smallest heavyweight in NHL history feared no one. Proof positive when you look back at his epic battles against the greatest bruiser in NHL history, Bob Probert. As for Stevens, he was one of the games greatest hitters and basically ended Paul Kariya’s career with a bomb.

Domi who made a big splash with his antics, was a big wrestling fan and used some references like Randy “Macho Man” Savage’s raised finger wag.