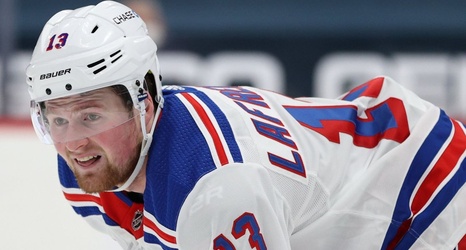 Alexis Lafreniere of the Rangers looks on against the Capitals during the second period at Capital One Arena on Feb. 20, 2021 in Washington. Credit: Getty Images/Patrick Smith

No. 1 overall draft pick Alexis Lafreniere got only seven minutes and 53 seconds of ice time, almost half his season average of 14:44.

Acting coach Kris Knoblauch attributed the low number to "mismanagement’’ of the bench, on his part.

"It's probably mismanagement of the bench, and not realizing the situation,’’ Knoblauch said after the Rangers beat the Capitals, 3-1, Saturday in Washington. "I know we had a lot of ‘D’ zone faceoffs.