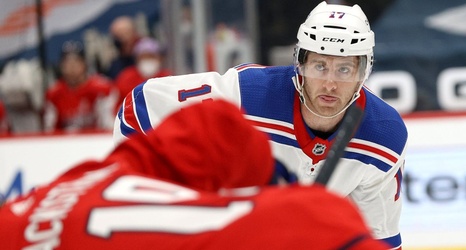 Kevin Rooney of the New York Rangers follows the puck against the Washington Capitals in the first period at Capital One Arena on March 28, 2021. Credit: Getty Images/Rob Carr

David Quinn couldn’t put a date on when Vitali Kravtsov is going to enter the Rangers' lineup, but it’s going to be soon. And Brett Howden, who has missed the past four games after going on the team’s COVID-19 list last week, is likely going to be getting off the list sometime this week, as well, which will make for a crowded roster among forwards.

"Yeah, it was a logjam,’’ Quinn said Sunday, when asked about the reasons behind the team trading rugged Brendan Lemieux to the L.