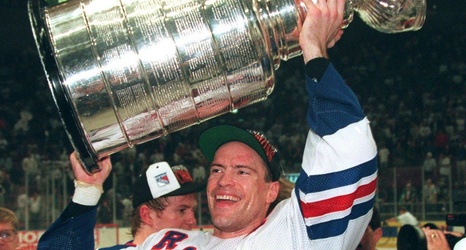 Rangers captain Mark Messier hoists the Stanley Cup over his head to celebrate his team's win over the Canucks on June 14, 1994. Newsday photo by Credit: Newsday / Paul J. Bereswill

Former Newsday Rangers beat writer Steve Zipay has written a new book on the Rangers, titled, “The Big 50: The Men and Moments that made the New York Rangers.’’ The book is a collection on the 50 most significant players and moments in the franchise’s 94-year history, as rated by Zipay. It tells well-researched and fascinating stories from the franchise’s entire history, including features on most of the key players from the 1994 Stanley Cup championship team.