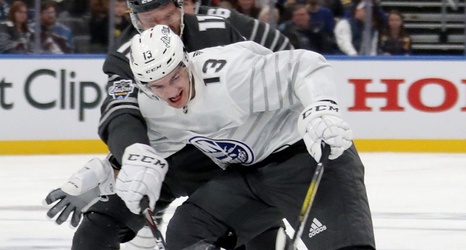 Mathew Barzal of the Islanders skates against Jonathan Huberdeau of the Florida Panthers in the game between Metropolitan Division and Atlantic Division during the 2020 NHL All-Star Game on January 25, 2020 in St Louis, Missouri. Credit: Getty Images/Bruce Bennett

ST. LOUIS — It was over too quickly for either of their tastes — just two, 10-minute periods for Mathew Barzal and Chris Kreider, who were eliminated along with the rest of the Metropolitan Division in Saturday night’s NHL All-Star Game.

But while Kreider — 28 and playing in his first All-Star Game — lamented the fact that he was dressed in a suit, while the rest of the league’s All Stars still played behind him, he acknowledged that this long-held dream was everything he could have hoped for.