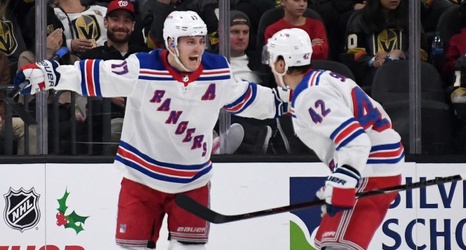 SAN JOSE, Calif. — It seems as if David Quinn finally has found a fourth line he is comfortable playing with regularity.

Into his second season as the Rangers coach, Quinn has shown to be quick in shortening his bench, even more so this season with a rotating cast of fourth-liners. But starting with the 5-0 win in Las Vegas on Sunday that kicked off this four-game road trip, Quinn has had a fourth line including part-time defenseman Brendan Smith on the left, Greg McKegg in the middle, and Jesper Fast on the right.

Following the dull 3-1 loss in Los Angeles on Tuesday night, the Rangers traveled north for Thursday night’s game against the Sharks — and Quinn is starting to have a semblance of a four-line team.