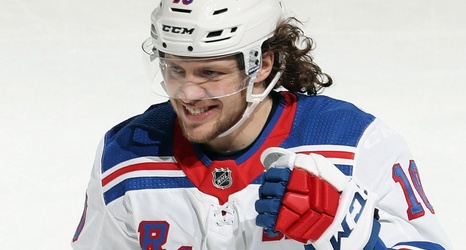 Artemi Panarin #10 of the Rangers celebrates his goal against the New Jersey Devils at 7:50 of the third period at the Prudential Center on April 13, 2021 in Newark, New Jersey. Credit: Getty Images/Bruce Bennett

Artemi Panarin knew he had played in his 100th game as a Ranger on Tuesday night, but he had no idea that his goal in the third period of the Rangers’ 3-0 win over the Devils actually put him in the team record book. The goal was his 138th point as a Ranger, making him the highest-scoring Ranger after 100 games with the club.