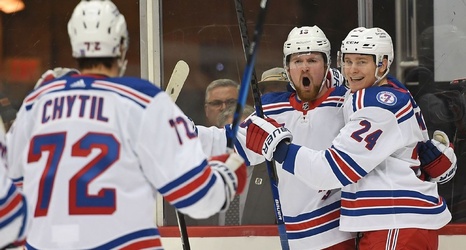 It was a moment when youthful exuberance met Stanley Cup playoffs euphoria.

Facing elimination in Game 5 at Madison Square Garden against the Pittsburgh Penguins, the New York Rangers were staging a rally. As they had for most of the first-round series, the trio christened "The Kid Line" -- 20-year-old left wing Alexis Lafrenière, 21-year-old right wing Kaapo Kakko and 22-year-old center Filip Chytil -- acted as the accelerant to turn a spark of momentum into an offensive explosion.

It began with a pass attempt from Kakko from behind the Penguins' net to Lafrenière, as Pittsburgh defenders closed in.