Yeah, Whatever: My Interview With @DanyAllStar15 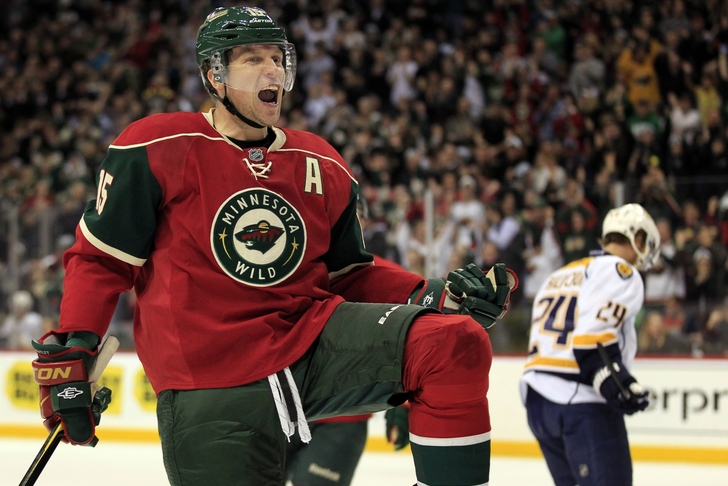 I was watching some hockey earlier this year. I don't know why I was watching a Minnesota Wild game. Or at least, I didn't know why. And then this guy caught my eye, and I knew what my purpose was in watching that game. I had to talk to Dany Heatley.

The dude clearly gave no f*cks. He was just skating around like he had no purpose on the ice whatsoever, clearly checking out the girls in the stands. He might have scored. In the game, that is. I have no idea, and who cares, cuz I know he scored that night. Now, my dream has been realized. Here now, unabridged, is my interview with Heater.

What frat were you in at Wisconsin?

Yeah, myself you know? As of the face of the NHL I don't need a teamate that's for losers like Jason Spezza.

What’s the worst city you’ve ever played in?

Do you enjoy being generally regarded as a massive prick?

You have been traded for, among others, Marian Hossa, Milan Michalek, Jonathan Cheechoo and Martin Havlat. Who do you most want to fight?

Yeah, definitely not Cheechoo. Guy potted 50 goals, collected his cash, and stopped giving a sh*t and I respect that. Probably Marian Hossa for having bad style.. his jersey's always tucked in the back like an idiot.

Yeah, never heard of her.

What do you think of this year’s Stanley Cup matchup?

Yeah, I think it's Bullsh*t. If I didn't hurt my shoulder throwing all those single dollar bills in the club I easily would have carried Minnesota to the finals with my clap bomb.

How can the Bruins be beaten? What about the Blackhawks?

Yeah, for the Bruins somebody needs to lure big boy Claude Julien away from the rink by strategically placing doughnuts around the city of Boston. He will be a no-show causing the Bruins to forfeit. For the Blackhawks, booze up Patty kane before the game and well that'll take care of itself.

Who’s the biggest girl in the NHL who is always taking a dive?

Yeah, I'd say Brad Marchand of the Bruins even though it's probably that big f*ckin nose weighing him down causing bad balance and sh*t.

What are your thoughts on going for Wilt’s record?

Yeah, I don't know who that is but I'll pass it easily and take his girl too.

Who wins in a game of drink, you or Dean Martin?  You vs. Hemingway?

Yeah, nobody out drinks me I was baptized in bacardi I'm a world champion google me.

What’s the trick to avoiding or curing a hangover?  That is if Dany Heatley even has experienced a hangover.

Yeah, keep alcohol in your system at all times. Rehab is for quitters.