Instant Reaction: Lightning Skate Past Rangers 2-0 In Game 5, Move A Win Away From Stanley Cup Finals 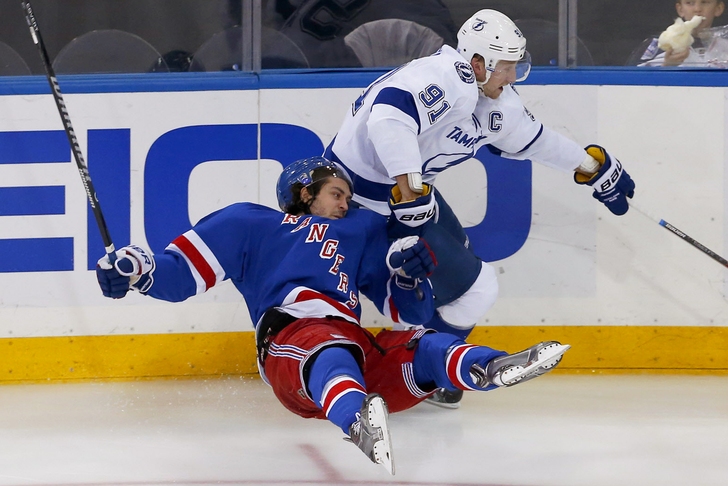 The New York Rangers' offense has played hide and seek throughout these 2015 NHL Playoffs. It was nowhere to be seen during Sunday's Game 5 of the Eastern Conference Finals.

Valtteri Flippula and Steven Stamkos tallied goals in a pivotal second period, goalie Ben Bishop was sharp when called upon and the Tampa Bay Lightning are one game away from the Stanley Cup Finals after a massive 2-0 road win at MSG.

New York had an efficient night in Game 4, regaining home-ice advantage with five goals on 24 shots. Game 5 was the exact opposite for the blue shirts, as their attack looked stagnant and listless for large chunks of Sunday's game. It didn't help either that Tampa sacrificed their bodies all night long with over 20 shot blocks.

Tampa now has a 3-2 series lead with a closeout game coming in two days.

The game shifted on a transition break for Tampa through the neutral zone. New York's defense spread out too wide and gave the Lightning the middle of the attacking zone ice, where Flippula would hammer home the game's first goal and suck the life right out of the Garden.

No one. New York struggled to execute coach Alain Vigneault's gameplan all night long, and they simply looked overmatched in the biggest game of their season so far.

Steven Stamkos played like the star we know he can be, tallying the Lightning's second goal and an assist while proving himself far and away the best player on the ice this night.

The series shifts back to Tampa Bay for Tuesday's Game 6. The puck is slated to drop just past 8:00pm local time.