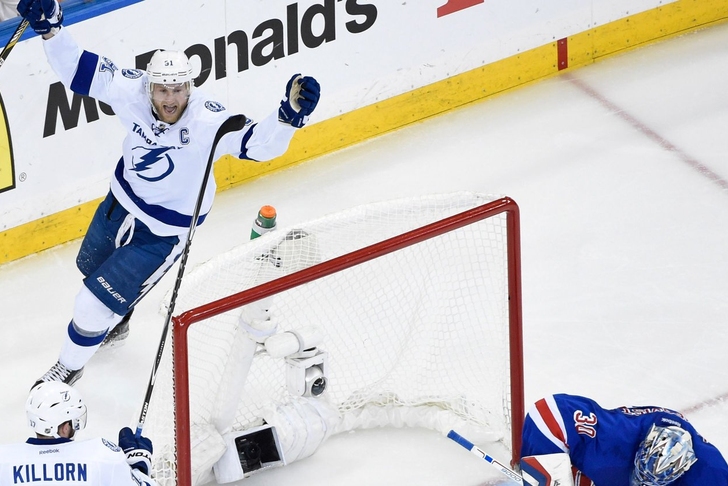 They ended up paying the ultimate price, however, in Friday's winner-takes-all Game 7 at Madison Square Garden.

Thanks to Killorn's timely heroics, a crowd-killing insurance goal by winger Ondrej Palat and a clutch third period stand by goalie Ben Bishop, the Lightning are now on their way to their first Stanley Cup Finals in 11 years. The Lightning won that 2004 series in seven over the Calgary Flames.

As for New York, they fall a single game shy of returning to the big stage for the second-straight go-around.

Alex Killorn's third period tally was a true thing of beauty. Splitting a sea of blue shirts in the faceoff circle to the right of NYR goalie Henrik Lundqvist, Killorn effortlessly dragged the puck through the chaos and fluttered a winner past Lundqvist with a beautiful backhand push.

Some will call it a soft goal allowed on Lundqvist's part, but Killorn's full effort made for more than just a lucky floater.

Ben Bishop wasn't tested really at all in the first two periods, as New York could only muster a paltry 11 shots on goal. The Rangers turned up the heat on Bishop in the third, but the final frame was a clinic in how to break a home team's hearts in an elimination game. In fact, Bishop ends the East Finals with two road shutouts (Games 5 & 7) at MSG.

As he did for long stretches of the series, Henrik Lundqvist kept the Rangers alive with an array of brilliant stops including an unreal tip of the glove save off on an early Lightning chance. The Killorn game-winner will haunt New York all offseason, but Henrik has nothing at all to hang his about.

The Tampa Bay Lightning await the winner of tomorrow's Blackhawks/Ducks Game 7 in Anaheim. The New York Rangers stay home and begin preparations for the summer.