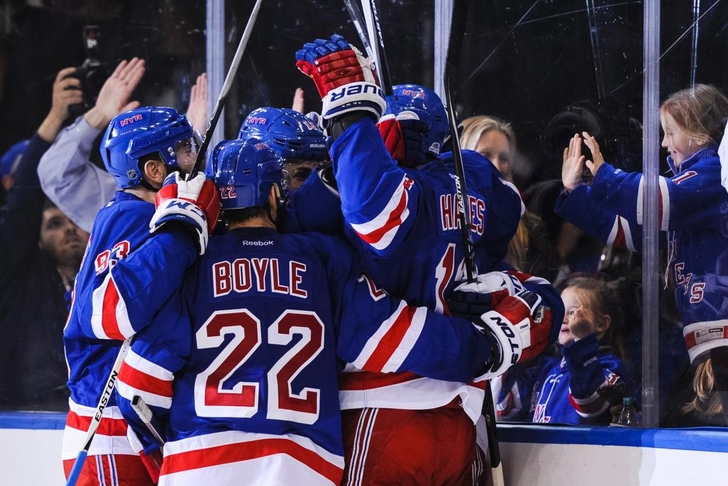 The New York Rangers evened their Eastern Conference Finals series with the Tampa Bay Lightning at two with a rousing 5-1 Game 4 road victory on Friday. With things all knotted up heading back to MSG, now's a good time to take a look at the 3 things the NY Rangers must do to win a PIVOTAL Game 5 at home.

1. Henrik Lundqvist Must Stand On His Head Or Close To It

Lundqvist's six-goal flameout in Game 3 aside, there's no goaltender left in these playoffs who can steal a game quite like Henrik can. Tampa's offense went dormant in Game 4, but that's the exception and not the rule for the Lightning in these playoffs. New York, on the other hand, has watched key scorers such as Rick Nash go cold at random as they've slogged their way through the East.

All that adds up to the spotlight shining directly on Lundqvist -- something he seems to thrive under.

2. Rick Nash Has To Keep His Momentum Going

The Rangers are a different offensive beast when Rick Nash is lighting the lamp. He hasn't done it much this postseason, with his two goals in Game 4 standing as just his third and fourth of the postseason so far. In fact, Nash has scored just nine times in 57 postseason games in New York. Nash still does the little things write, but the Rangers will be darn near unstoppable if he builds off Friday's breakout performance.

The NY Rangers were efficient on the power play in Game 4, going 2-for-4 while exercising patience swing the puck around from point to point. New York wasn't just patient on special teams, putting together a five-goal effort on just 24 shots. Tampa, on the other hand, seemingly threw pucks at random towards the cage, scoring just once on 39 shots.

The old adage "just get the puck to the net" doesn't always fly in the heat of the playoffs. Sometimes it's the cooler heads who make the extra pass who get all the glory.