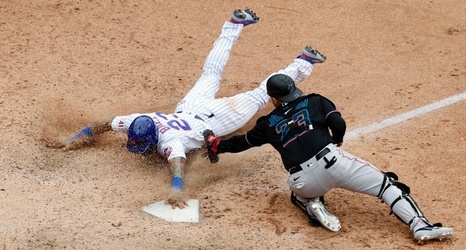 NEW YORK (AP) — Javier Báez sprinted home from first for the game-ending run on Michael Conforto’s single, earning cheers from a fanbase he insulted days earlier in the New York Mets’ 6-5 win over the Miami Marlins on Tuesday.

In the resumption of a game suspended by rain April 11, the Mets scored five runs in the final inning and won it when Báez scored following a Marlins error.

READ MORE: AFC East Preview: 'Looking At A Division That Could Have Four Really Good Quarterbacks For The Next 10 Years,' Says CBS Miami's Michael Cugno

Báez was booed when he entered as a pinch hitter in the eighth inning, hours after apologizing for revealing Sunday that a thumbs-down celebration gesture used recently by the team was dig at fans who have been booing the struggling club recently.