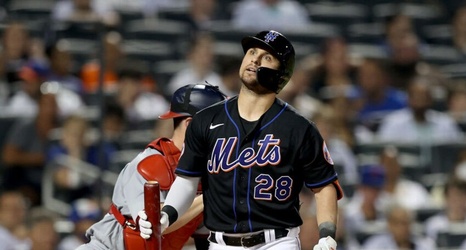 NEW YORK, NEW YORK - AUGUST 27: J.D. Davis #28 of the New York Mets reacts after he struck out in the fourth inning against the Washington Nationals at Citi Field on August 27, 2021 in the Flushing neighborhood of the Queens borough of New York City. (Photo by Elsa/Getty Images)

If Ryan Murphy ever needs some new ideas to feature on American Horror Story or any of its spinoffs, he doesn’t need to look much further than the New York Mets offense.

Whatever negative adjective you know can be used to describe this club.