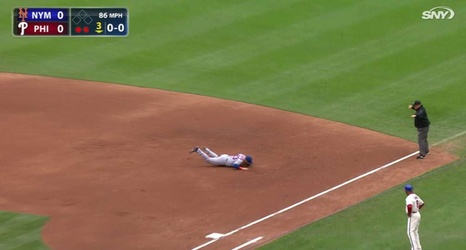 Eickhoff struck out 10 Mets over seven innings to highlight the Phillies' sweep, allowing four hits and a walk. Originally scheduled for Thursday evening, the game became a matinee due to concern over poor weather moving into the area. Not that the daylight hours were pristine; many players wore long sleeves with temperatures topping out in the upper 50s and a consistent wind blowing out to left field.

MOMENTS THAT MATTERED
Eickhoff looks legit: Eickhoff (3-3, 2.65 ERA) was considered the fourth-best prospect among the five the Phillies acquired from Texas for Cole Hamels and Jake Diekman in July.

See full article at Official Site of the Mets