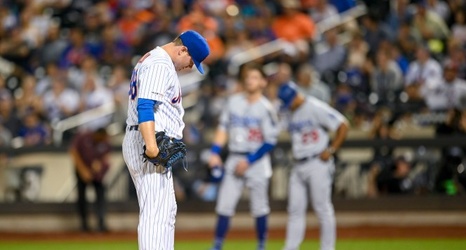 It was a costly outing for Mets reliever Justin Wilson on Sunday night.

In a must-win series finale against the Dodgers, Wilson couldn’t follow up a strong seven-inning performance from starter Zack Wheeler as the Mets fell 3-2 at Citi Field.

When Wilson entered with a 2-1 lead in the eighth inning, things didn’t look promising from the start. He gave up a leadoff walk to pinch-hitter Jedd Gyorko and then a series of unfortunate events of Wilson’s own making during Max Muncy’s at-bat helped the Dodgers tie the game.

Wilson balked and threw a wild pitch to allow Gyorko to go from first to third before striking Muncy out.