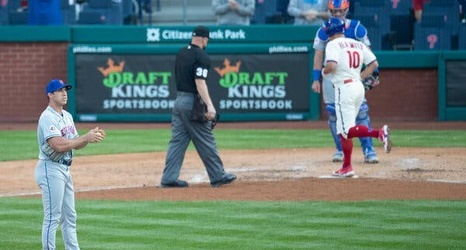 PHILADELPHIA — Alec Bohm and J.T. Realmuto each hit three-run homers, Rhys Hoskins had a solo shot and the Philadelphia Phillies beat the Mets, 8-2, on Wednesday.

The Phillies took two of three from their division rivals after opening the season with a three-game sweep of three-time defending N.L. East champion Atlanta.

Phillies ace Aaron Nola lasted only four innings, pitching out of trouble the final two. He allowed one run and six hits, striking out five.

“He had to grind through,” Phillies Manager Joe Girardi said. “His location and stuff wasn’t sharp but he found a way to get through four innings against a good lineup giving up only one run.