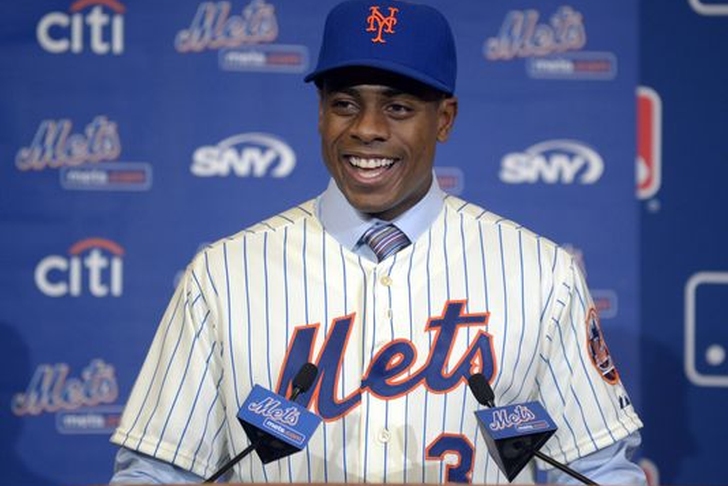 The New York Mets figured to be one of the more active teams during this offseason, and they have been fairly active thus far. The winter meetings didn't lead to as many moves as some had thought, but the Mets are showing that they are willing to significantly improve their team even if that means increasing the payroll. Here are the areas the Mets will look to improve over the rest of the offseason.

Starting Pitching: The one move the Mets did make at the winter meetings was signing Bartolo Colon to a two year $20 million deal. There is a lot of skepticism about this deal for the Mets especially when you consider that Colon is upwards of 40 years old. But when you look at Colon's numbers from last year he was solid for the Oakland A's in the American league. The American league is the tougher league to pitch in so the transition to the National league should help Colon. Colon was an all-star last year and came in sixth in the AL Cy Young award voting after picking up 18 wins for the AL West champs.

The Mets rotation is starting to round into shape for the 2014 season. Four out of the five spots are definitively filled already with Zach Wheeler, Dillon Gee, Jonathon Niese, and Colon. Those four make up a very solid rotation so far. Remember the Mets will be without their ace Matt Harvey for the 2014 season due to Tommy John surgery. It would seem as though the Mets will look outside the organization for the fifth starter, but they do have internal options in the minor leagues. If they were to sign a lower grade free agent for this season it would most likely just be as a place holder for when top prospect Noah Syndergaard comes up in the middle of the season.

Outfield: Who will be providing these pitchers with run support? Well the big splash the Mets have made so far was signing Curtis Granderson to a four year $60 million deal. Last year the Mets came into the season with a questionable at best outfield, but so far this year that outfield looks like the strength of the offense (besides David Wright, obviously.) Curtis Granderson will most likely play left field and bat fourth to protect Wright in the lineup. Juan Lagares will more than likely play center field where he is a gold glove caliber fielder, but needs to improve his offense. In right field the Mets will go with Chris Young whom they recently signed to a one year $7.25 million deal. Young is an interesting case because he has 20-20 potential, but is coming off a down year due to lack of playing time. He will get every opportunity to play everyday with the Mets this season and they hope he can produce like Marlon Byrd did last year.

With the outfield being pretty much set, that brings us to the infield. Third base is David Wright who will bat third, and catcher is set with Travis d'Arnaud preparing for his first full season as the catcher. The other infield spots are all question marks because of possible trade rumors.

Shortstop: The Mets have not been pleased with the production they have gotten out of Ruben Tejada at the shortstop position and they have therefore been looking to upgrade whether it be through trade or free agency. The free agent market is very thin at shortstop with the exception of former Red Sox shortstop Stephen Drew. The Mets have been in talks with Drew but his demands may be too high for the Mets. Another possible option would be a trade, and the Mets have been linked to the Diamondbacks, who have two young shortstops, Chris Owings and Didi Gregorius. It is unknown what the Diamondbacks are asking for these prospects or what the Mets would be willing to give up for a new shortstop. What is fairly evident though, is that the Mets are trying to get a new shortstop for next season, and at this point it seems pretty likely.

First Base: The Mets have an overload at first base at the moment with both Lucas Duda and Ike Davis. It was thought that the Mets would have traded Davis at the winter meetings but that didn't happen and they still have both first basemen. The Mets have still been in talks to trade Davis, particularly with the Brewers, but that doesn't necessarily mean Duda will be the everyday first baseman. The Mets have been looking to upgrade at first base as well which could mean trading both Duda and Davis. Recently it has been said that the Mets might look to add Kendrys Morales if the market softens on him. Morales becoming a Met is not very likely, and Duda is more than likely to be the Mets opening day starter at first base, but the Mets aren't ruling anything out with regards to first base.

Second Base: The Mets opening day second baseman is on the roster right now, they just aren't sure yet who it will be. Daniel Murphy seems to be the obvious choice because he is one of the teams best hitters, but the Mets have put Murphy on the trade block. The reason he is on the trade block is because the Mets view Eric Young Jr. as an everyday player, and with the outfield full second base would be the only place for him. Young is also the only legitimate leadoff hitter on the roster so the Mets really need him in the lineup everyday. It has been said that trading Murphy is very unlikely because the Mets are asking for a lot in return from other teams. It will certainly be worth watching whether the Mets trade Murphy, and if they don't, what they do about the leadoff spot in the lineup.

Bullpen: The Mets have yet to add anyone in the bullpen so far this offseason and will likely wait until their lineup and rotation is set to do so. The only guarantees in the bullpen for the Mets are closer Bobby Parnell and possible setup man Vic Black. Besides that the Mets will look to add pieces to the bullpen. They have been linked to veterans such as Mitchell Boggs, and Chris Perez, both guys coming off down years who they can sign for cheap.  They also have some young arms in the farm system who they can bring up to join the bullpen like Jeurys Familia and Jeff Walters. Either way the Mets bullpen will more than likely have a new look again this year.

The winter meetings may be over but there is still plenty of time left in this offseason, and a lot of free agents still available. The Mets still have a lot of moves to make and a lot of holes to fill, but they have shown their fan base that they are definitely trying and willing to improve the team.