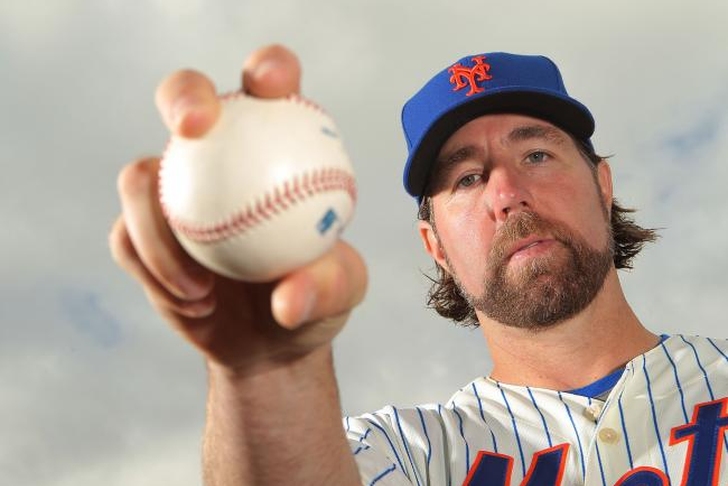 But alas, the world isn’t perfect for Alderson anymore than it’s perfect for Dickey.  Alderson is under incredible not just to make the Mets a contending team over the long haul, but to make them a team that can be competitive in 2013.  To do that, Alderson has a lot of work ahead of him.  In addition to a profound lack of power and speed, the Mets have several glaring holes on their roster that need to be adequately filled if they’re going to become competitive in the National League East, one of the toughest divisions in baseball.

At the top of the list is a right-handed power bat, preferably an outfielder.  Outside of David Wright the Mets have no prominent right-handed bat that can go in the middle of their order.  The only outfielders on their roster that are realistic options to play in 2013, even in a platoon role, are left handed, including Lucas Duda, Kirk Nieuwenhuis, and Mike Baxter, who would likely compose the outfield if the season were to start today.  A lineup with those three players in addition to first baseman Ike Davis, second baseman Daniel Murphy, and catcher Josh Thole would be too lefty heavy and wouldn’t hold up over a full season, making it imperative that Alderson acquire a right-handed outfielder than can either bring power or speed to the Mets lineup.

Another position where the Mets need a right-handed bat is catcher.  In addition to finding a right-handed hitter that can help balance their lineup, the Mets need someone who can supplant Thole as the team’s primary catcher.  Although he has been masterful as the receiver of Dickey’s knuckleball behind the plate, Thole is not the caliber of catcher that will be the starter on a playoff team, and is better suited to be a part-time player behind the plate.

The Mets are also in need of a bullpen makeover, yet again.  Incumbent closer Frank Francisco isn’t the most trustworthy pitcher in the 9th inning; however, he and Bobby Parnell are the only relievers on the Mets roster that have at least one full year of major league experience.  Even with a good crop of young relievers, some of whom appear ready to join the bullpen full time at the start of the season, it would be a mistake to think that the Mets don’t need to add veteran pitchers to sure up their bullpen.

That brings us back to Dickey; trading him is the best chance the Mets have to make a dent in their laundry list of needs this offseason.  Coming off a 20-win season in which he won the Cy Young award and drew massive amounts of attention from both fans and the media, Dickey’s value will never be higher, which makes him the best trade chip the Mets have when it comes to being competitive in 2013 and growing into a perennial contender over a longer period of time.

Others will argue that Jon Niese, or possibly top pitching prospects Matt Harvey and Zack Wheeler, could garner more value in a potential, and while that may be true, all three young pitchers are under team control for a longer period and at a cheaper price for the cash-strapped Mets than any contract extension the Mets would feel comfortable offering to Dickey at this point.  While possible, it’s unlikely that Dickey would be able to repeat as a 20-game winner and Cy Young candidate in subsequent years, even if he continues to be an effective pitcher whose performance matches or exceeds what is expected of him based on his salary.  Meanwhile, the trio of Niese, Harvey, and Wheeler has the potential to anchor the Mets rotation for many years to come, putting and then keeping the Mets in contention in the National League long after Dickey has retired.

In a perfect world, Dickey would get to stay with the Mets; he would sign an extension that would allow him to stay in New York and help the Mets become a competitive ballclub once again.  It would be wonderful for Dickey to pitch for the Mets in 2013 and beyond, both for the team and the fan base.  However, the world isn’t perfect: the Mets have a lot of needs to fill and they need to fill them fast.  The one area where the Mets have considerable depth and talent is in their starting rotation, which is why they’d be able to survive trading Dickey in both the short and long term.  While it’s not an ideal scenario, if traded, Dickey has the value to give back to the Mets a player or players that fit their immediate needs, which is why the Mets must trade him now, at the peak of his value.  It’ll be a sad thing for the Mets to trade away a pitcher that won a Cy Young for them and has brought so much positive energy to the team and the organization, but it’s a move that must be made.  Life’s just not fair is it, especially for Dickey, Alderson, and the Mets.