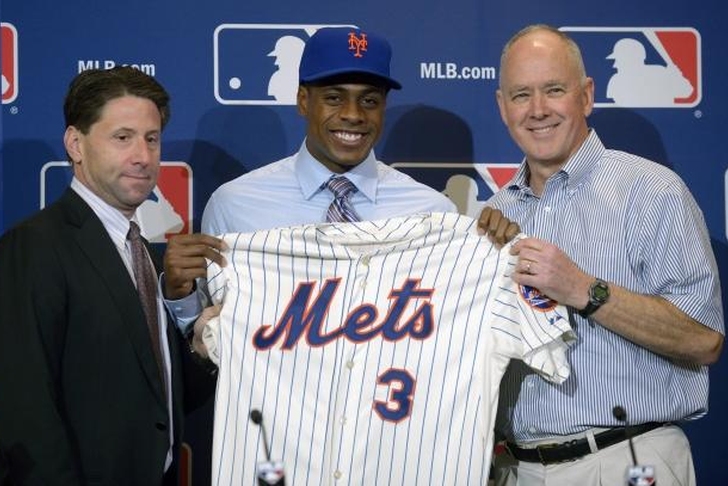 There has been a lot of talk from the New York Mets this year as to whether they can win 90 games. This all started when Mets General Manager Sandy Alderson said that he thinks this team can win 90 games and compete for a wild card spot. David Wright, the captain of the team, echoed the sentiments of his GM and now the Mets have set some high expectations that may just be unattainable.

The Mets went 74-88 last season, which means to reach 90 wins they would need to win 16 more games. On the surface it would seem like the Mets vastly improved their team this season with the additions of Curtis Granderson, Bartolo Colon, and Chris Young. But when you look deeper the team might not actually be all that improved. Granderson will be replacing Marlon Byrd who had 21 home runs and 71 RBI's in 117 games with the Mets last year. Granderson has had two seasons with 40-plus home runs but will be moving to pitcher-friendly Citi Field. A realistic expectation would be for Granderson to match what Byrd gave the Mets last year, maybe give them better power numbers, but with a lower average.

Bartolo Colon finished sixth in AL Cy Young award voting last year. He signed a two-year, $20 million deal with the Mets this offseason. He will come in this season to fill the void left by Matt Harvey's Tommy John surgery. Colon had a 2.65 ERA last season in 190 innings of work, but will turn 41 years old this season. Filling Matt Harvey's shoes is virtually impossible for one person, so it will take a collective effort from the whole pitching staff to do so. The Mets do have a young stud in Noah Syndergaard, who will make his major league debut in the middle of this season, but he can't be expected to be lights-out in his first taste of the big leagues.

When looking at those two additions, Met fans can only hope that Granderson and Colon give them similar production to the players they are replacing, which would put them in the same place as last year. Having said all of that, there are a few ways in which the Mets can improve their team and possible record before the season starts whether it be by internal decision making, going into the free agent market, or making a trade. Here are a few things they can do:

Trade Ike Davis and make Lucas Duda the everyday first basemen: Ike Davis has made headlines all offseason long and not in a good way. When you add that to the fact that he hasn't produced on the field in quite a while, it just doesn't seem worth it to keep him around. Lucas Duda showed last season that he is more comfortable at first base defensively, and that also improved his performance offensively. Giving Duda a shot to play every day could lead to him hitting 25-30 home runs, and Duda is a high on base percentage guy which the Mets love.

Improve shortstop by any means necessary: Ruben Tejada has looked awful so far this spring, which is no surprise, and it is clear he is not a starting shortstop in the major leagues. Shortstop is a position where the Mets can very easily improve. Stephen Drew is still a free agent and would be a major upgrade. Also the Mets could find a trade partner in the Arizona Dimaondbacks, the Cleveland Indians, or the Seattle Mariners, all teams with multiple shortstops who are big league ready. The Mets have been linked to Nick Franklin of the Seattle Mariners. Of all three suggestions made here, improving shortstop is the most likely to actually happen because the Mets have made it no secret how unhappy they are with Tejada.

As you can see, a lot of things really need to go right for the Mets to win 90 games. A full healthy season from David Wright and getting the old 30 home run Chris Young would be welcome by Met fans too. The likelihood of a 90-win season for the Mets in 2014 isn't great but you have to admire their confidence. Stranger things have happened, but you would have to think that 2015 is more likely for the Mets to make a playoff push with the return of Harvey and more available money to spend on players. Look for minor improvement from this year's New York Mets, but 90 wins is still probably at least a year away.