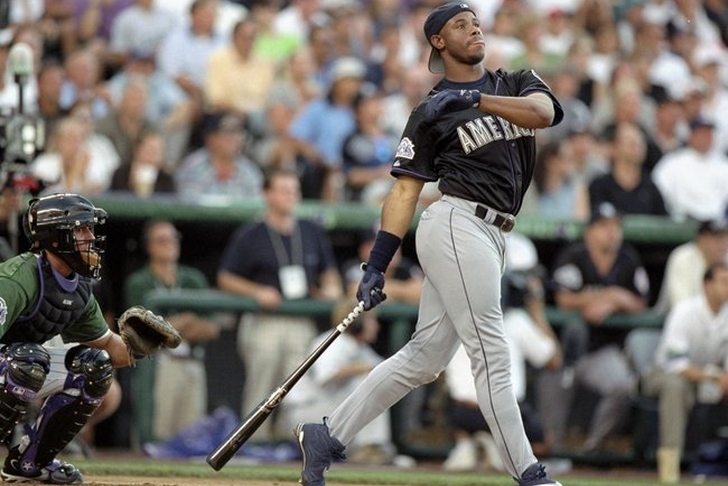 The Major League Baseball Home Run Derby is a lot of things. It is long, even arduous to watch at times. It contains (almost) enough Chris Berman nonsensical yelling to satisfy the quota for an NFL weekend. But it is also quite the spectacle. It is the best chance we get to see the absolute raw power MLB players can have in their bats (like when Mike/Giancarlo Stanton almost hit the glove in left field at AT&T Park). Tonight's event at Citi Field figures to be no different. Here's a look at the five greatest hitters in Derby History.

He is the only player on the list who has never won a Derby, but his name will live in Derby lore because of his memorable 28-homer performance in the first round of the 2008 Home Run Derby at Yankee Stadium, the most ever in the first round by a long, long ways. Ironically, he only managed three homers in the final round against Justin Morneau, who hit five in the finals and 22 in the entire tournament, still six less than Hamilton's first round alone.

Just a one-time Derby winner (2010), Ortiz actually holds the record for most total homers in the history of the event, with 77. He made it to the semifinals in 2004 and 2005, but didn't participate again until 2010, when he won the event with 32 total dingers. It was a long-time coming for Big Papi, who might be the most natural contestant in Derby history because that's basically how he treats games.

Bobby Abreu hit 41 homers in the 2005 edition of the Home Run Derby in Detroit. Forty-five. That is outrageous. His final round total of 11 remained the best all-time until it was eclipsed in each of the last two years. Still, marvel as we do at Hamilton's 35 in 2008, no one was as consistent as Abreu. Amazingly, that is the only Derby Abreu has ever competed in, yet that one year is still good for ninth all time. For comparison, Matt Holliday has competed in three Derby's and only hit 23.

The defending champion, this will be the Prince's fifth time in the Derby and third in a row, having also competed in 2007 and 2009, when he won the event for the first time. Along with the top man on this list, Fielder is one of only two players with multiple Derby wins, and earns the distinction of being the only player to ever win the Derby for a National League team (Brewers, 2009) and an American League team (Tigers, 2012). Both of Fielder's titles have been low-scoring affairs - he was tops with 16 homers before the finals in 2012 and 17 in 2009, numbers that would have gotten him eliminated in 2008, 2010 and 2011. But he banged out 12 homers in the final round last year to knock off Jose Bautista and claim his second career crown.

The man who many consider to be the best pure hitter who ever lived is also the best Home Run Derby contestant of all time. He competed a record eight times, all back in the 1990s when players got just one round and the winner was decided right then and there (sounds good to me). He won in 1994, 1998 and 1999, and remains the only player to win back-to-back titles, his 19 homers in 1998 being a record at the time.