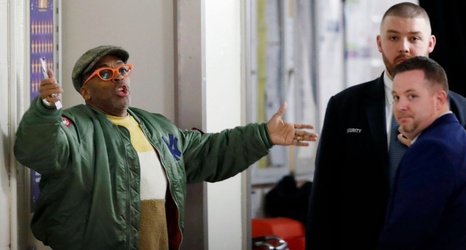 Director Spike Lee, left, gestures in a hallway on the event level at Madison Square Garden while arguing with security officers who didn't want to permit him to access his courtside seat before the start of a game between the Knicks and the Rockets on Monday. Credit: AP/Kathy Willens

GREENBURGH, N.Y. — Monday night began with the Leon Rose era becoming official and ended with an impressive win over the Houston Rockets. Still, the talk on Tuesday centered on a feud between the Knicks and a longtime fixture of the franchise.

Spike Lee, a season-ticket holder for 28 years and one of the team’s most fervent celebrity fans, got into a loud argument with security guards at the Garden Monday when he attempted to enter through the employee entrance and was rebuffed.