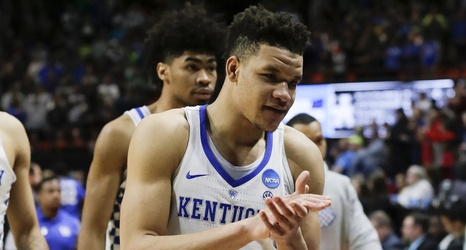 Big news in New York today! A talented small forward is the apparently the apple of the Knicks' eye.

...let's not even get into that right now. The forward I'm talking about is young Kentucky product Kevin Knox, an intriguing frontcourt prospect in next week's draft who apparently had Knicks GM Scott Perry and President Steve Mills looking like human heart-eye emojis after last week’s workout, according to ESPN’s Ian Begley:

Some members of the Knicks organization came away ‘very impressed’ by Kentucky’s Kevin Knox after his performance in workout with the team last Saturday, per league sources.