Raptors 120, Knicks 105: Scenes from an Orlando bubble vibe in Toronto 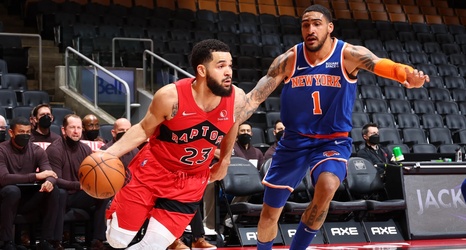 The New York Knicks rang in 2022 with a 120-105 defeat to the Toronto Raptors. Omicron’s rapidity spreading and humanity’s stupidity helping it along combined to leave Toronto’s arena closed to any fans. In keeping with that spirit of absence, the Knicks never really showed up either, falling behind by double-digits five minutes in and trailing by that much throughout. The Knicks played without Julius Randle, Derrick Rose, Kemba Walker, Mitchell Robinson, Nerlens Noel, Wayne Selden, Jericho Sims, dignity, their best effort, or a snowball’s chance in hell of winning.