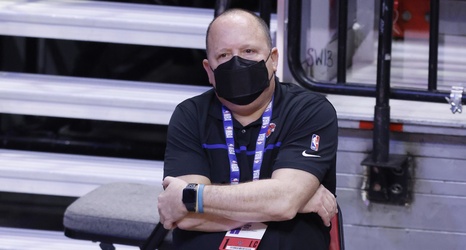 NEW YORK, NEW YORK - NOVEMBER 23: (NEW YORK DAILIES OUT) DeMar DeRozan #10 of the San Antonio Spurs in action against the New York Knicks at Madison Square Garden on November 23, 2019 in New York City. The Spurs defeated the Knicks 111-104. NOTE TO USER: User expressly acknowledges and agrees that, by downloading and or using this photograph , user is consenting to the terms and conditions of the Getty Images License Agreement. (Photo by Jim McIsaac/Getty Images)

The Knicks have continued to exceed expectations this season as they are still in the mix for their first playoff berth in eight years.