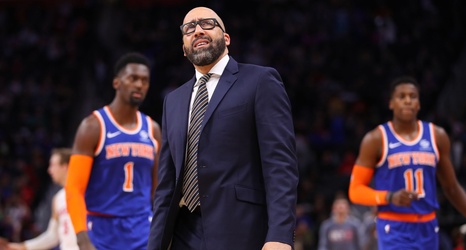 The first 13 games of the New York Knicks’ season brought a 3-10 record. Two of that trio of wins came against Kristaps Porzingis‘ Dallas Mavericks and the other happened in a comeback win over the Chicago Bulls. The other 10 matchups have been, for the most part, a struggle to overcome, including a late-game collapse to the Charlotte Hornets.

A game against the Cleveland Cavaliers is ahead on Monday. Afterward, the schedule’s level of difficulty takes off. The Knicks will have plenty to overcome over the next three weeks, leaving questions surrounding what kind of win-loss record they walk out with: