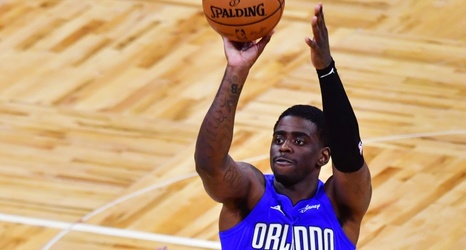 Dwayne Bacon #8 of the Orlando Magic shoots against Nicolas Claxton #33 of the Brooklyn Nets in the first half at Amway Center on March 19, 2021 in Orlando, Florida. Credit: Getty Images/Julio Aguilar

WASHINGTON, D.C. — It was just a few months ago that Dwayne Bacon was finishing off his fourth NBA season by playing in every game for the Orlando Magic, starting 50 of them. But in the sort of lesson that reminds players that the NBA is a business, he finds himself in the Knicks training camp trying to fight for the 15th and final spot on the roster.