Knicks great returns to drop some knowledge on RJ Barrett 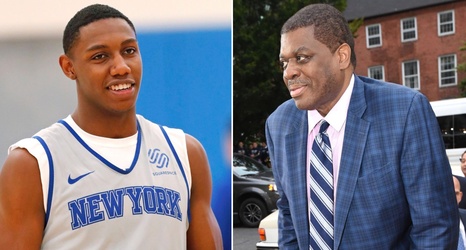 Last season, the Hall-of-Fame scoring forward was assigned as rookie Kevin Knox’s mentor and they got together for four sessions, even spending some time together on the road for breakfasts. Now it’s on to RJ Barrett, the Knicks’ third-overall pick in June’s draft.

After Thursday’s practice, Barrett sat for several minutes with King, who has been invited for the second straight year to training camp. King, the Brooklyn-born scoring machine, will be with the club until Saturday.

“It’s obvious to me he wants to be an outstanding player,’’ said King, wearing a vintage Knicks jacket.