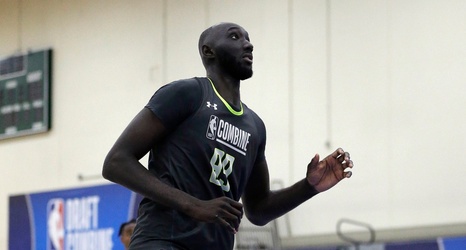 The Knicks will begin private draft workouts Monday at their Tarrytown headquarters, and the first one up is also the tallest: 7-foot-7 Tacko Fall, The Post has learned.

The gargantuan Central Florida big man is coming off a rousing draft combine in Chicago, to which he was not even invited at the start. Fall needed to qualify in a pre-combine event, called the “Next 40,” that was staged earlier in the week before the lottery.

The Knicks interviewed 30 players at the combine but not Fall. Knicks brass came into the combine unsure he was an NBA player because of his limitations as a mobile defender.