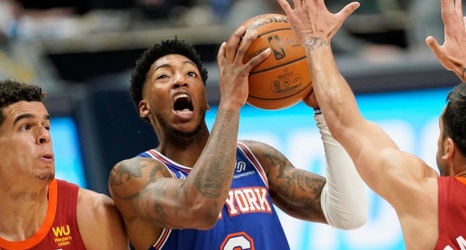 Knicks guard Elfrid Payton (6) drives to the rim between Denver Nuggets forward Michael Porter Jr. (1) and guard Facundo Campazzo (7) in the second half of an NBA basketball game Wednesday, May 5, 2021, in Denver. Credit: AP/David Zalubowski

The Knicks head into the postseason as one of the hottest teams in the NBA, soaring to the No. 4 seed and homecourt advantage in their first-round series against the Atlanta Hawks on the strength of 16 wins in the final 20 games of the season.

But not everyone was flying high through the finish line. As the Knicks made their way through the final stretch of the season, Elfrid Payton saw his struggles grow, his minutes drop and the cries from the fans for him to be removed from the lineup nearly as loud as the chants of, "M-V-P" for Julius Randle.