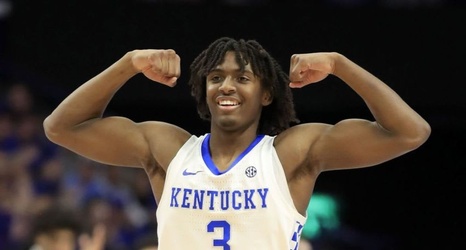 New York Knicks option Tyrese Maxey #3 of the Kentucky Wildcats celebrates after a basket in the game against the Ole Miss Rebels at Rupp Arena on February 15, 2020 in Lexington, Kentucky. (Photo by Andy Lyons/Getty Images)

The New York Knicks could take Kentucky guard Tyrese Maxey in the 2020 NBA Draft, and there are reasons to believe he could thrive in the Big Apple.

As the NBA Draft approaches, there doesn’t seem to be any consensus as to what the New York Knicks should do with their picks. Picking 8th overall is a tricky spot in any draft, but the shortened NCAA season has made the 2020 class particularly volatile.