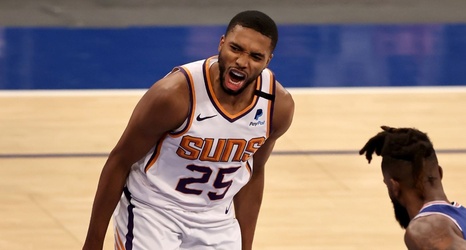 Mikal Bridges #25 of the Phoenix Suns celebrates his shot in the fourth quarter against the Knicks at Madison Square Garden on April 26, 2021. Credit: Getty Images/Elsa

It might have seemed like Mikal Bridges had a little bit extra to play for when he took the floor at Madison Square Garden on April 26 against the Knicks.

While Chris Paul deservedly got the attention when he buried three shots in the final 90 seconds — each with an increasing degree of difficultly — to finish off a 118-110 win over the Knicks, ending their win streak at nine games, Bridges had done just as much to put the Suns in position for the victory.