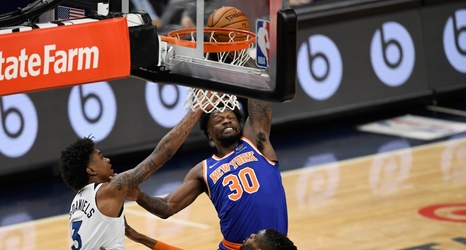 MINNEAPOLIS (CBSNewYork/AP) — Anthony Edwards scored 11 of his 24 points over the final eight minutes, leading a fierce rally by the Minnesota Timberwolves for a 102-101 victory over former coach Tom Thibodeau and the New York Knicks on Wednesday night.

Karl-Anthony Towns had 18 points and 17 rebounds, and Malik Beasley highlighted his 20 points with the go-ahead 3-pointer with 37 seconds left for the Timberwolves, who outscored the Knicks 22-9 over the final 7:50.

Julius Randle had 26 points, 12 rebounds and six assists for the Knicks, who led by as many as 18 points in the second quarter.