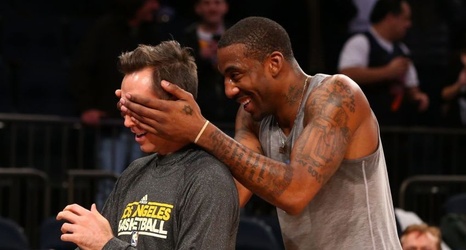 NEW YORK, NY - DECEMBER 13: (NEW YORK DAILIES OUT) Amar'e Stoudemire #1 of the New York Knicks jokes with Steve Nash #10 of the Los Angeles Lakers before their game at Madison Square Garden on December 13, 2012 in New York City. The Knicks defeated the Lakers 116-107. NOTE TO USER: User expressly acknowledges and agrees that, by downloading and/or using this Photograph, user is consenting to the terms and conditions of the Getty Images License Agreement. (Photo by Jim McIsaac/Getty Images)

A former New York Knicks star will be leading the stars of Brooklyn.

It was Amar’e Stoudemire who famously proclaimed the Knicks are back after signing a five-year deal with the team worth nearly $100 million in 2010.