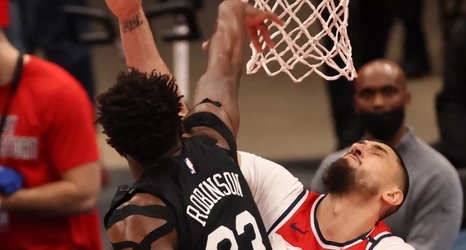 Mitchell Robinson had 10 points and 14 rebounds. That they came in just the first half isn’t the story. That they stayed at 10 and 14 is. On a night the Knicks thoroughly dominated the Washington Wizards 109-91, Robinson’s fractured right hand is the big story.

Entering the night, four of the five Knicks starters — Robinson, Julius Randle, RJ Barrett and Elfrid Payton — have started every game. Contrast that stability with Washington’s starting five featuring Garrison Mathews in place of the league’s leading scorer, Bradley Beal. But it was Mitch who would play the game’s hero and its tragic figure, with a performance that thrilled with what it was and chilled thinking it could be gone for a while.