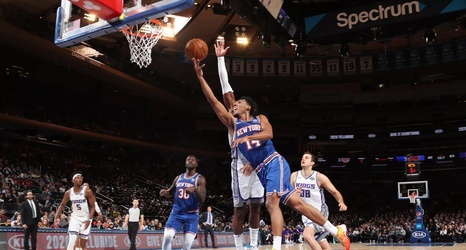 I thought Halloween was over, but apparently nobody told the Knicks. On a chilly Sunday evening, a dozen young rapscallions sneaked onto the porches of New York sports fans, filled some bags with dog dookie, lit them ablaze, rang the doorbells, and hid behind the bushes, laughing all the while. We poor fans, who had hoped to witness a competitive basketball game, were left with flaming bags of poop to extinguish.

David Fizdale chose to shake up the starting lineup despite a strong showing Friday night in Boston. It proved a disastrous mistake, as the visiting Sacramento Kings jumped all over the Knicks early, built the lead to as much as 30 in the second half, and cruised to a 113-92 victory.