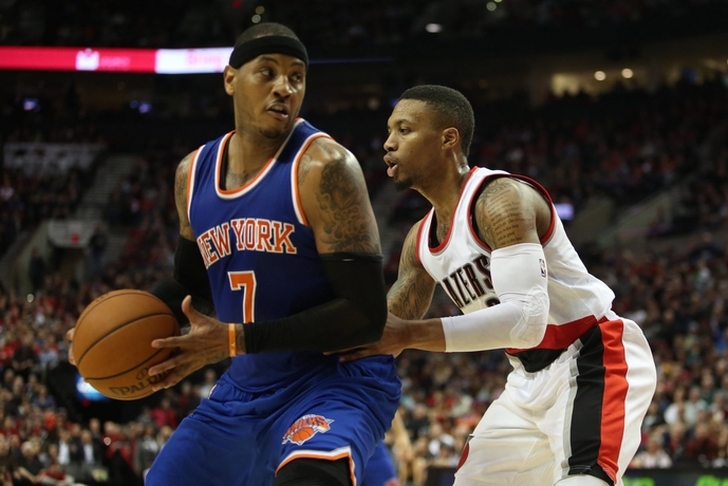 It's no secret that the New York Knicks have been working on trading Carmelo Anthony to either the Cleveland Cavaliers or Houston Rockets, and are engaged in new discussions about a possible three-team deal that would send him to Houston.

According to @JSports_ent, a former scout who has sources within the Knicks organization (examples here and here), the trade would involve the Portland Trail Blazers and would send Moe Harkless and Meyers Leonard to New York.

Source: Blazers, Rockets, #Knicks have engaged in early talks regarding a 3 team deal that could potentially send C. Anthony to Houston.

Keep in mind talks are very early names that have been discussed are Anderson, Harkless, Myers, Melo. Talks are fluid. https://t.co/ihEMldxgly

Again a deal is still not imminent these talks are early so I have not been told of picks being involved. https://t.co/YC16QIJ1vG

The Knicks would shed some cap space in the deal, and Harkless and Leonard are young players who have some upside. Both players are under contract through the 2019-2020 season, giving New York time to gauge their value as they rebuild.

Portland is looking to offload some salary as they're set to have one of the league's highest payrolls this season, and while this deal wouldn't do that, it would give them a starting power forward in Anderson - something they also need.

Houston would get to acquire Anthony, which they've been trying to do, while being able to hold onto core pieces in Eric Gordon, Trevor Ariza and Clint Capela.

Check out our New York Knicks team page for all the latest Knicks Free Agency Rumors or download The Chat Sports App!