Knicks Rumors: Carmelo Anthony "Not Interested" In Playing For Knicks Next Season 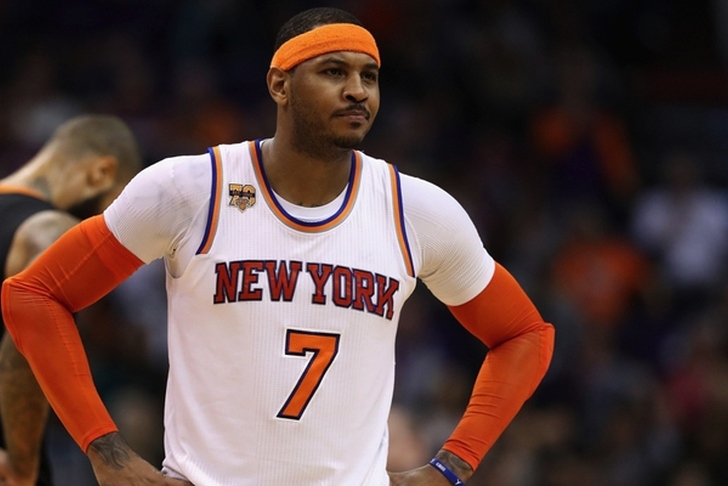 The New York Knicks have broken off trade negotiations with the Houston Rockets about a Carmelo Anthony trade due to their desire to keep the 10-time All-Star. However, that desire in only goes one way.

Marc Berman of the New York Post reports that Anthony has absolutely no desire to return to the Knicks next season.

One day after the Knicks new management team stated Carmelo Anthony potentially could return, it appears Anthony still has no desire to talk with Knicks president Steve Mills and new general manager Scott Perry about that possibility.

According to ESPN’s Adrian Wojnarowski, who commented on the Knicks’ situation during a “SportsCenter” appearance Tuesday morning, Anthony “has made it clear to [the Knicks]: I want to go to Houston. I am not interested in talking to you about being reincorporated back into this New York roster.”

According to an NBA source, the Knicks have yet to restart talks with the Rockets after breaking them off Friday.

Anthony was reportedly convinced that he would be traded to the Rockets, and as of now, that's the only place he wants to play next season.

New York and Houston were talking with the Blazers about being the third team in an Anthony trade, but Portland would rather have Anthony for themselves instead of facilitating a trade to sent him to another Western Conference team. The deal has since stalled as neither team has been able to find a taker for the remaining three years and $60 million on Ryan Anderson's contract.

Anthony may also be trying to force a buyout from the Knicks, which is his preference so he can join the Rockets as currently constructed. He has two years and $54 million remaining on his deal, though he can opt out after the 2017-18 season.

He averaged 22.4 points and 5.9 rebounds per game this past season.

Follow our New York Knicks team page for all the latest Knicks rumors or download the Chat Sports App!