Knicks Looking To Trade For Backcourt Help Before Deadline 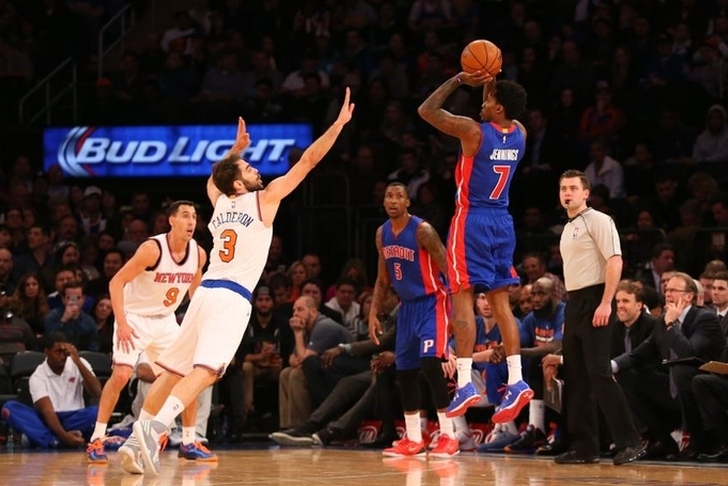 The New York Knicks are surprisingly competing for a playoff spot in the Eastern Conference, but their roster is still a work in progress - and they know what area they need to improve. With Carmelo Anthony, Kristaps Porzingis, and Robin Lopez holding down the frontcourt, the Knicks are looking to trade for some help in the backcourt, according to ESPN's Ian Begley.

Some members of the front office recently expressed interest in obtaining a young scoring guard or a shooter to improve the backcourt, sources said. Though, one source cautioned, the Knicks don’t plan, at this point, to make a move that would have an impact on their future cap flexibility.

According to reports, Jamal Crawford, Kevin Martin and Brandon Jennings, among others, might be available via trade. Jennings is a 2016 free agent, so he wouldn’t impact the Knicks’ cap situation this summer if they choose to acquire him as a rental. But he’s coming off of ruptured Achillies tendon injury, so trading for him would come with a significant amount of risk. The New York Post reported that Jennings is on the market.

The Clippers have originally made Crawford available this summer and haven't taken him off the trade block since. He's scheduled to be a free agent this summer, so he wouldn't hinder New York's cap space (over $20 million) in the offseason - but New York didn't pursue him at all when he was originally made available.

Minnesota has also been looking to shop Kevin Martin to make room for rookie Zach LaVine in the starting lineup alongside Ricky Rubio, but Martin is under contract for $7 million next season, cutting into New York's cap space.

That leaves Jennings, who New York is rumored to be heavily pursuing. He has been replaced by Reggie Jackson in Detroit's starting lineup, and the Pistons haven't been shy about making him available. Jennings will also be a free agent after this season, putting him as the low-risk, high-reward favorite for the Knicks.

If New York doesn't acquire a point guard before the trade deadline, they're certain to sign one in free agency this summer. Both Memphis' Mike Conley and Sacramento's Rajon Rondo headline the point guard class.

The Knicks are currently 12-14 on the season.