Here's What The Knicks Are Willing To Trade For Kyrie Irving 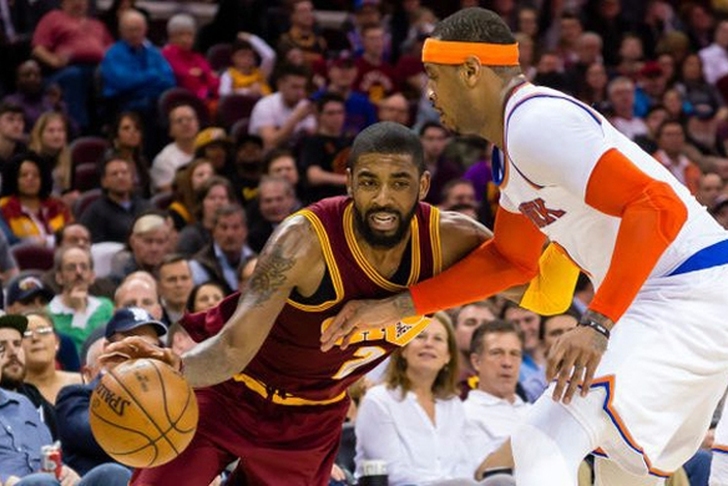 Now that Kyrie Irving wants a trade from the Cleveland Cavaliers, multiple NBA teams are looking into adding the all-star point guard. The New York Knicks are among those teams and they happen to be one of the four teams Irving said he'd like to play for.

The Knicks want to land him, but they won't give up everything. Namely, they won't move forward Kristaps Porzingis.

"The Knicks, obviously, have strong interest in Kyrie Irving (just like 29 other teams) but I'm told people in the Knicks front office would not be willing at this point to include Kristaps Porzingis in a trade," ESPN's Ian Begley reports. Some with the organization would be willing to include future first-round picks and Carmelo Anthony in a deal for Irving, per league sources."

Including Anthony isn't a surprise at all, since the Knicks have had talks with the Houston Rockets about a trade. The Knicks could elect to include first round pick Frank Ntilikina in a deal, since they'd land Irving and wouldn't need another young PG. In fact, they'd probably have to in order to land Irving given the interest in him. The Knicks, because of Anthony's large salary, would also have to take back someone like Iman Shumpert. Of course, that's if a third team doesn't get involved.

It's worth mentioning that Jordan Schultz reports the Knicks, Suns and Cavs are involved in talks. Eric Bledsoe and Tyson Chandler could head to the Cavs, while T.J. Warren could also be involved. The Suns want Frank Ntilikina from the Knicks, at least a first and Channing Frye's expiring contract. Schultz, however, doesn't have the track record of reporting accuracy that others like Woj do.

The Knicks are far from the only team that would love to land Irving. As a result, the bidding war for a PG still under team control for two years (with a third year player option) could drive the price up higher than the Knicks are willing to go.

Check out our New York Knicks page for all the latest Knicks Rumors or download the Chat Sports App!