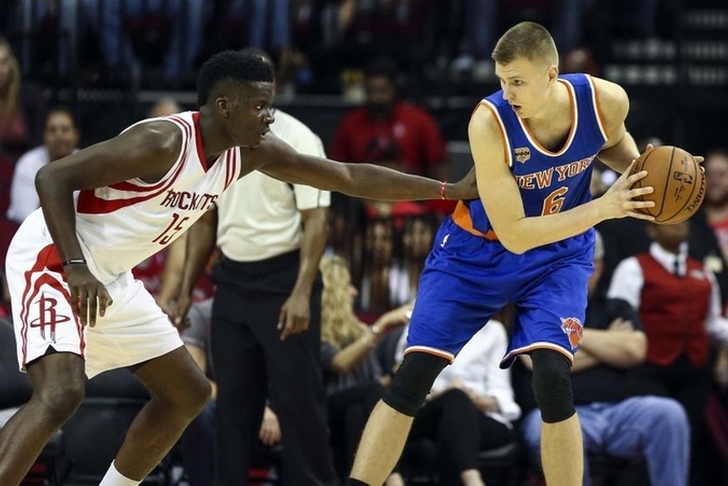 The New York Knicks are in a bit of a rebuild, with the future of Carmelo Anthony likely no longer in New York. So while the Knicks aren't expected to make the playoffs, they do have several notable games this year. After all, they remain one of the most valuable franchises in all of sports. With the league releasing the full schedule Monday night, the top games involving the Knicks are listed below.

We tried to avoid repeating the same teams over and over, so there's plenty of variation. Primetime and national TV games were weighted more heavily, although it's a down year for New York, with just eight. Here are the top 10 games the Knicks will play in the 2017-18 regular season.

8. at Miami Heat - 7 p.m. ET, Jan. 5th, ESPN
The Heat should be the better team this year, but it's a game the Knicks can win. It's also one of eight national TV games (excluding-NBATV) games the Knicks have this year.

7. at Boston Celtics - 8 p.m. ET, Jan. 31st, ESPN
Two of the Knicks' three games against Boston are on national TV, but the road game gets the nod here. The Celtics should be among the top Eastern Conference teams, so this won't be.

6. vs. Los Angeles Lakers - 7 p.m. ET, Dec. 12th, ESPN
Two of the biggest NBA franchises, the Lakers and the Knicks, is usually worth watching. Yeah, both teams probably won't make the playoffs, but that means it should be a competitive game.

5. vs. Cleveland Cavaliers - 7:30 p.m. ET, Nov. 13th, no TV
Will the Knicks probably lose this game? Yes. Is it still one of their top games because it's the Cavaliers? Also yes.

4. at Golden State Warriors - 10:30 p.m. ET, Jan. 23rd, No TV
Basically take the same write-up from the Cavs and apply it to the Warriors, minus the LeBron part. This is the only time these teams play this year.

3. vs. Philadelphia 76ers - Noon ET, Dec. 25th, ESPN
The Knicks pretty much always play on Christmas Day since the NBA started making that date an important one for the sport and this year they get the 76ers. Has trusting the process finally paid off for the 76ers? We'll have a decent idea by the time this one tips off.

2. at Oklahoma City Thunder - 8 p.m. ET, Oct. 19th, TNT
This is quite the fun season opener. It's the first look at Paul George in a Thunder jersey and it's on TNT. The Knicks will be the underdogs, but this is one of their best games all year.

1. vs. Houston Rockets - 8 p.m. ET, Nov. 1st, ESPN
Will this be the first game for Carmelo Anthony back in New York? He wants a trade to the Rockets, but it's unclear if that will actually happen. Our guess is it will (via a trade or release), but if not, it's still going to be a great game.

Check out our New York Knicks team page for all the latest Knicks rumors or download the Chat Sports App!