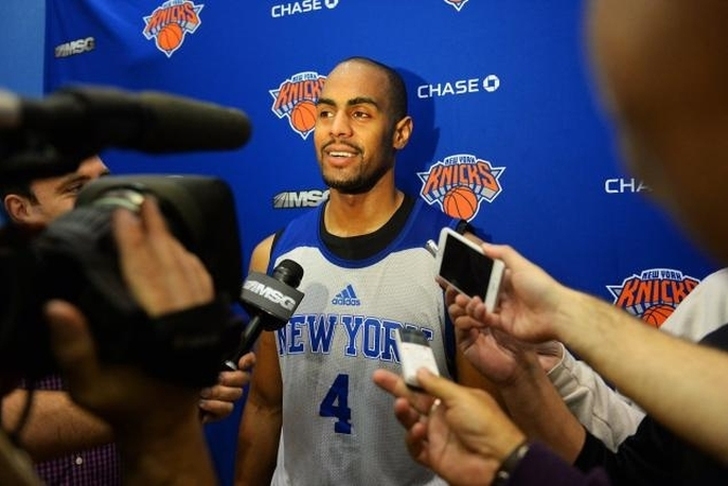 New York Knicks shooting guard Arron Afflalo will miss Tuesday's game against the Toronto Raptors, but his return isn't far away. According to Al Iannazzone, Afflalo is expected to return Wedensday night against the Charlotte Hornets.

Afflalo said he is calling himself probable for tomorrow.

Afflalo suffered a left hamstring strain in New York's final preseason game and hasn't appeared in a game this season.

The Knicks have been extra cautious with Afflalo's return, saying they need him for the long haul.

“Hamstrings are really tricky, and we want this guy to be back for the long haul,” Knicks head coach Fisher said. “He’s doing everything that he can do.”

Fisher also said while Afflalo won't have any minute restrictions placed on him, but he will keep the 30-year-old from playing both games in back-to-back sets.

After spending last season with the Denver Nuggets and Portland Trail Blazers (where he was traded at the deadline), he signed a two-year, $16 million deal with the Knicks as a free agent in July, though the second year of the deal is a player option. Afflalo admitted that he left money on the table elsewhere in free agency to join the Knicks, citing that he believed in the plan Knicks president Phil Jackson told him he had for the Knicks.

New York signed Afflalo to be their starting shooting guard, hoping to rely on his stingy defense and three-point shooting ability to complement Langston Galloway and rookie Jerian Grant in the backcourt.

He averaged 13.3 points and 3.2 rebounds per game last season.