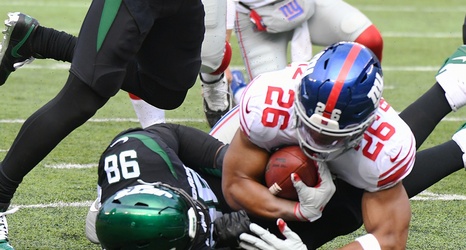 Concern for Saquon Barkley after he rushed for 1 yard increased exponentially when he took about 20 steps.

Barkley made the short trip from the Giants locker room to the X-ray room Sunday at MetLife Stadium after the worst performance of his NFL career in a 34-27 loss to the Jets.

“Next question,” Barkley said when asked about his health.

For a no-excuses player, it’s as close to an admission as possible of what is clear with the naked eye: He’s far from 100 percent. X-ray results were not immediately known.

Barkley rushed his return from a three-game absence from a high ankle sprain and has lacked the same first-step explosion in his first four games back.